Missouri is home to many different types of spiders of all different sizes, shapes, and colors. Some of them can even be very poisonous and could require medical attention after a bite! Unlike insects, spiders have eight legs and are in the arachnid family along with mites and ticks. Spiders can live in almost any habitat. Below are some of the most common spiders in our area. 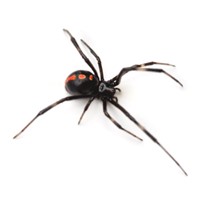 The female black widow is easily identifiable with her black body and reddish hourglass shape on her abdomen. Males are usually lighter in color with a median row of red spots with white lines on the sides. Immature black widows are usually orange and white, turning black as they mature, with 1 or 2 reddish markings on the abdomen. Outside, black widows are commonly found in protected areas under firewood, decks, in hollow stumps, rodent burrows, etc. They are also frequently found inside barns, sheds, henhouses, meter boxes, barrels, etc. While indoors, black widows can be found in rarely used areas of basements, crawlspaces, and garages. It is a very poisonous spider, and if bitten, seek medical attention immediately. The venom is known as a neurotoxin and should be treated with an antitoxin. 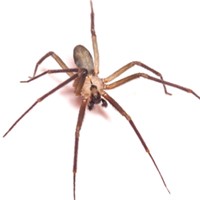 The brown recluse is light tan to dark brown in color with a violin or fiddle shaped dark brown mark starting at the front of the spider, with the neck of the violin pointing towards the rear. Their name comes from their reclusive habits. They prefer to live in undisturbed, seldom used areas such as boxes, underneath tables and chairs, along baseboards, in closets, attics, crawlspaces, and basements. Outside, they live around rocks, logs, woodpiles, in utility boxes, exterior rodent bait stations and debris. If disturbed, the spider will usually try to run for cover instead of biting. Bites mostly occurs when putting on rarely used clothing and shoes, cleaning out closets or storage areas, and rolling over on one while in bed. Their bite is not usually felt immediately but rather felt within 6–8 hours of being bitten. An ulcer will usually form where the bite was and can result in severe scarring. There is no available antitoxin for bite victims. 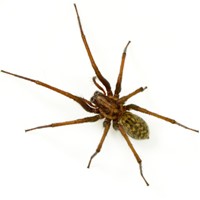 The funnel web spider is brown in color with long, dark stripes running down its back. Their legs may also have banded markings. Their web is usually seen on mornings after a heavy dew. They build their webs mainly in bushes, on grass, and occasionally in siding or under eaves. Their web is a horizontal sheet-like structure with a small, funnel-like tube in the center or off to the side. They primarily feed on insects and are harmless to humans. 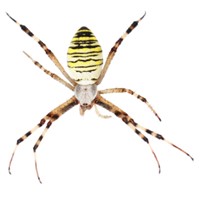 Garden Spiders are found throughout the United States and Canada, and are black and yellow color, usually with a stripe pattern. Females are much brighter in color and are up to four times larger than males. They can produce a complex web with a distinctive zig-zag pattern in the center. Their diet consists of insects like flies, bees and other flying prey. They live in plants in your front lawn. Garden spiders produce venom but are not harmful to humans. 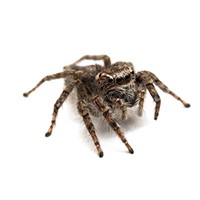 Jumping spiders can be a variety of different colors. They can have black, brown, or gray in color with white, gray, yellow, red, blue, or green markings. They have a furry, compact body with relatively short legs, and look like they are bunched together. Despite their short legs, they can jump up to 20 times their body length. Unlike most spiders, the jumping spider is active during the day. They may be found indoors underneath furniture, in drapery, on bookshelves, around door or window molding, etc. Outdoors, they are found under loose bark, between leaves, under stones, on decks, etc. 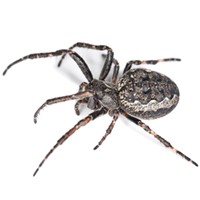 Orb Weaver spiders also come in a variety of shapes, color, and sizes. They likely have a rounded abdomen and are orange, brown or black in color. Their body size ranges from 6mm for males to 10-20mm for females. These spiders are commonly found on corners of homes, eves, and under decks and protective porches. Orb spiders will often spin a new web every night and can be helpful to lower a mosquito population. 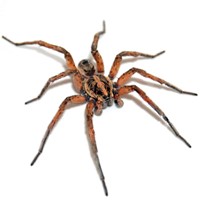 Wolf Spiders are very common in Missouri. These spiders have long legs and can vary in color from gray, brown, black, and tan with dark brown or black stripes. Wolf spiders don’t spin webs, instead they hunt for prey. Females are usually larger than males and will vary in size from 1/4th” to 1” inch not counting their legs. A Wolf spider’s diet consists of all ground dwelling insects, including other spiders. If disturbed, wolf spiders can bite but are harmless to humans. Female Wolf spiders will carry her egg sack at the bottom of her abdomen and later carry her babies on her back. 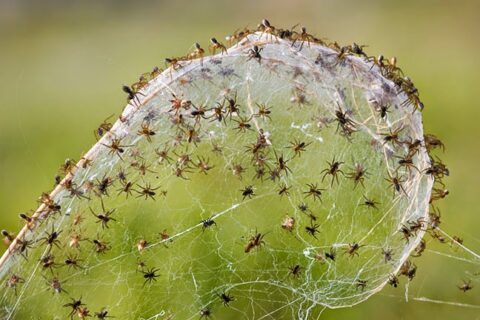 Fall is here! While it’s fun to put out spooky decorations, such as fake spiders, rats, bats, and snakes, it’s not as fun to see these creatures…